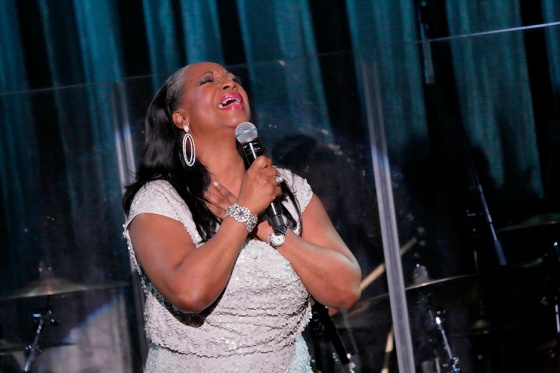 When I learned that Regina Belle was going to be performing at NYC’s  B.B. King Blues Club & Grill, I knew that I had to be there. After all, she is one of my favorite ’90s R&B singers. So much so, that I tried it (or her) when I was in college. Yup, I got up in front of a room full of folks and attempted to sing “Baby Come To Me” back in 1992. It wasn’t all wrong, but it wasn’t all right either. I still recall my unease and embarrassment as I walked away from that stage thinking,”Man, I didn’t do that song justice. I did not channel my inner Regina Belle tonight!” I needed to be at B.B. Kings to hear Belle sing one of my all-time favorite songs, the way it should be sung.

So there I was on a Saturday night, ears primed and ready to experience the deep, sensuous vocal stylings of this amazing vocalist, but two songs into her set I knew that something was wrong. Belle seemed to be struggling to get the notes out, and some of them missed their mark. Belle brought high energy with her opening song, a cover of The Spinners'”Could It Be I’m Falling In Love” but I knew my ears were picking up something off and I began to worry and wonder more with each strained and shaky note. Had Belle lost her vocal prowess and power? Was I witnessing a woman whose best days as a singer had come and gone?

Thankfully, before my thoughts got the better of me, Belle got transparent and told the truth – she wasn’t at her best vocally for this show. Her body was trying to break down due to the stress of losing her uncle (backstage after the show the 30-year music industry veteran shared she was actually recovering from bronchitis), but she proclaimed boldly that “the devil is a liar.” Gratitude and grace took over from that moment as Belle thanked her family, friends and fans in the audience for their love and support, and seemingly invoked the spirit of a higher power to help her through the remainder of the show.

The show did indeed get better, and quite entertaining, as Belle beckoned us to imagine B.B. Kings morphed into Harpo’s Juke Joint a la The Color Purple, complete with a jumping band named Two Cups of Kool-Aid, a pair of fierce “blackground” singers, and Belle herself, momentarily transformed into the character Shug Avery to pay homage to Black History Month and sing “Ms. Celie’s Blues (Sister).” Overjoyed by the noticeable difference in Belle’s vocal delivery, I commenced to finger-snapping and hand-clapping as the self-professed church girl acquiesced to shouted requests from the audience and delivered a cappella snippets of “If I Could”, “This Is Love” and “What Goes Around.” Belle took her time to deliver her performance of “Make It Like It Was,” explaining that she loves love songs because she can take her time and really put herself into it.

Also wonderful was Belle’s humorous introduction of her new album, The Day Life Began, which she encouraged guests to go get so she could “pay a light bill or two.” Belle shined during her performances of “He’s Alright” – which took the evening to a higher level thanks in part to audience member and musical mentor Gerald Alston (from The Manhattans, the group Belle credits with helping her get her musical start), and a random lady in the audience who played the heck out of her bedazzled tambourines.

I did not know until after the show, when I went home and Googled Belle, that she had recorded two gospel albums during her time away from R&B music. I did not know that Belle was a mother of five children, happily married to a former NBA player turned pastor, with whom Belle served as co-pastor at two Atlanta churches. I did not know that in 2009, Belle suffered a brain tumor, the treatment for which left her clinically deaf in one ear. I just knew that there was a time in my life that this woman’s music touched and transformed my life, and I wanted to sing those songs and feel those feelings with her, in person, at her show. Well, I got that, and then some. Although the show appeared to have a rocky start, by its end Belle succeeded in delivering a satisfying show and a soul-stirring testimony of triumph over trials and the power of faith.

Belle’s playful and lively performances of “Don’t Ask My Neighbors” by the Emotions, “Let’s Stay Together” by Al Greene, “Rock Steady” by Aretha Franklin and “Tell Me Something Good” by Chaka Khan laid to rest any doubt I had that Belle is still a vibrant, dynamic, gifted vocalist. Her performance of her new singles “A Night of Love” and “Be Careful Out There” proved that Belle is much, much more – a woman sustained by her family, her faith, and her fans, the latter of which I forever am.

For more info on Regina Belle and her new album, The Day Life Began, go to reginabelle.org.