Soulful singer Bradd Marquis has been honing his Sam Cooke showcase with several performances in the New York area, and he shared recently with his Blue Note performance that he’s ready to take the show on the road. That’s right soul music lovers, Bradd Marquis Sings Sam Cooke may be coming to a venue near you in the near future, and the show does not disappoint. Marquis is that humble, laid back, warm-spirited guy who you could easily spend hours talking to over a latte (not that I’ve done that, I’m just surmising) and it’s a real treat to see someone of his nature, talent and disposition light up, turn up, and take those in his presence to a higher place doing that thing that he loves so much – singing. If this sounds like an experience worth having be sure to follow Marquis on his social media and website for upcoming tour announcements and information. Here’s five things to know about the show before you go… 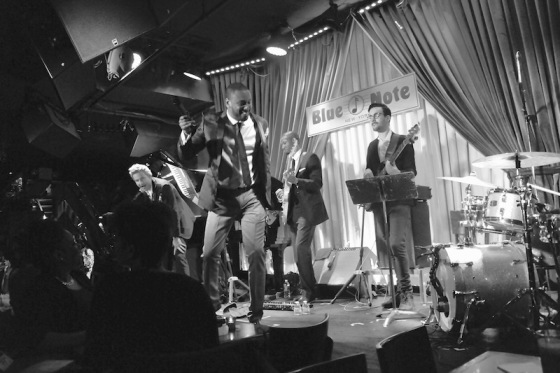 You’re going to have to give a little to get a lot.  Even mellow fellows like Marquis come with expectations, and for this show Marquis establishes his pretty much with the first song – he wants you to have a good time! To that end, Marquis encourages audience participation, be it with a little call and response, some hearty hand-clapping,  or  he just might jump into the audience, grab you by the hand, and do a little two-step with you. There are no cons to this scenario – you’ll giggle like crazy, you’ll make Marquis happy, and you can’t count your performance as your cardio for the day. Everybody wins.

Bradd does dance. And it’s cute as heck. Marquis opened up his show with the Sam Cooke classic “Twistin’ the Night Away” and I don’t quite know why I was surprised to see Marquis break into dance (after all he was just doing what the song said, right?) but I was surprised. And amused. Long and lean adequately describes Marquis so he’s not really working with a lot of twistable matter if you get my drift, but he does a good job with what he has. You go Mr. Marquis.

His smile is so bright you might want to walk with your shades. Like Sam Cooke, Marquis is a handsome fella with a smile that literally lights up a room, and he’s not stingy about sharing it either. It’s evident very quickly that Marquis is invested, passionate and putting all that he has into his one-hour performance, and he wants those in attendance to have as a great of a time as he is singing and sharing. He will indeed ask, “Are you still with me?” and if he likes what he hears and feels that love and appreciation guess what you’ll be gifted with – you got it, that megawatt smile and another song.

When you least expect it, he’s gonna blow you away with an impressive vocal run. I knew that Marquis could sing, but I didn’t know that he could put that “thang” on it and take it to church, which interestingly enough both he and Cooke grew up in. On songs like “(Somebody) Ease My Troublin’ Mind”,  “A Change Is Gonna Come” and  “Jesus Gave Me Water” Marquis’ vocal ability and range really shines. “Some of these songs are really, really hard to sing,” Marquis may boyishly state during his showcase as he takes a sip of water and prepares to woo you with him next song. Well to you Mr. Marquis we say, well done! You make Mr. Cooke proud.

It’s not just a musical performance – it’s history revisited. In between songs, and sips of water, Marquis will share how he came to know Sam Cooke’s music (his grandparents played it for him as a child), how he came to fall in love with Cooke the man and the musician (he read the singer’s biography Dream Boogie), and tidbits about the music legend that you may not have known, like the fact that Cooke had his own record label, SAR Records, refused to sing for segregated audiences and was active in the civil rights movement. Of course these gems of information took on a heightened sense of immediacy and relevancy because of the fact that I saw Marquis’ show during Black History Month, but you’ll most likely agree that any month is the perfect month to learn about musical masters and pioneers like Cooke, who have left an indelible impression on the music landscape and artists who have followed in this footsteps.

For more on Bradd Marquis and his upcoming shows, including January 22, 2017 at D.C.’s Howard Theatre as part of Sam Cooke’s birthday celebration, visit braddmarquis.com.

One thought on “Bradd Marquis Sings Sam Cooke: Five Things To Know About the Show”